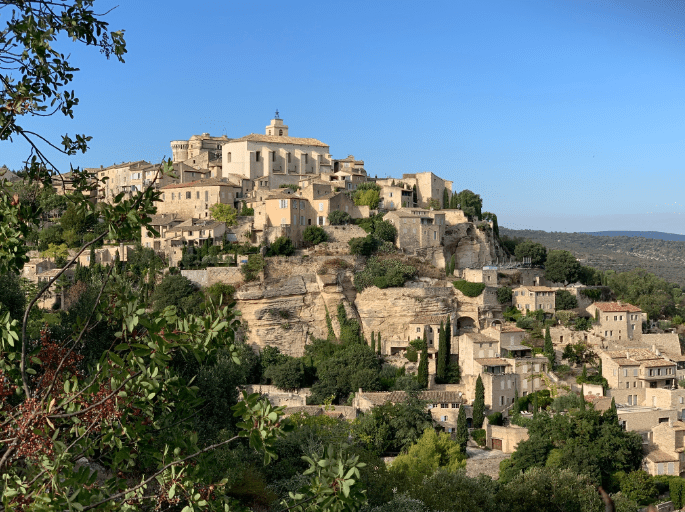 Between Avignon and Aix, just off to the left lies the area of the Luberon. The region was put on the map for Francophiles by Peter Mayle’s – A Year in Provence and follow -up Toujours Provence, which documented the travails, pleasures and joys of daily life in the region and most importantly the food.

The area despite the meteoric invasion of English tourists (Mayle actually decamped to the US to avoid the publicity effects he had caused!) still manages to hold a charm that is quintessentially regional France including the usual overtaking on impossibly narrow lanes. The area because of its proximity to the perennial Tour de France classic Mont Ventoux to the north attracts the Lycra clad cycling brigade adding additional spice to the driving.

We had decided to spend a couple of days in the region to get a feel for the area in mid-September. We had therefore mostly avoided the summer madness and most of the visitors were families “sans enfant” which is a bonus. The queues, hotels and parking were also similar easy to navigate. The only downside is we had missed the lavender season which lends the region it’s color and enhances the photos – fair trade off in my mind!

We chose the les Boriels near Gorde as our base. The hotel is close to the start of straightforward circle of the Luberon and boasts a great restaurant and has an awesome pool for an end of day splash. The hotel did not disappoint. Set above Gorde you can look out across the Luberon landscape and enjoy the mosaic of changing changing light that lends the Luberon it’s most alluring charm.

After a breakfast that can only be described as full French – bread, croissant, cheeses and cold meats, cafe au lait and local lavender honey. We went off for our short tour. This is definitely a place of the journey and views are as much part of the fun as getting out to see things. Our purpose here was very much to get a taste of the Luberon.

A short drive from les Boriels is the abbaye of Norte Dame de Senaque. Much photographed in Lavender season the abbaye is still working and dates back to 11c as monasticism spread across Mediterranean regions under the rule of st Bernard the monastery still has mass at noon. It is both a place of serenity, spiritual well being and architectural splendor. Most of the detail is in French and they have tablets for other languages. There is a pull over just before you to get to the Abbaye for some distance pics. The road in and out is one-way and pretty steep but fun to drive.

From here we went over heading to Roussillon

Stop #2 Roussillon is a hill top town. It was the center of ochre mining and the village has kept much of off its charm by ensuring the houses use a palette of shares of ochre. There are a great many restaurants, galleries and artisans. Main parking is at the base of moderate stroll up to the village. Well worth strolling to the panorama areas to. Gat a view across the vallies and out to the peak of Mont Ventoux. The church has a really interesting nativity scene with a foreshadowing of the crucifixation in the window of manager.

Given the voluminous breakfast we held off on food and trekked over to  Apt taking multiple pictures of the grape loaded vines made really attractive by the leaves just beginning to turn.

Apt was our crossing point over to the back villages of Bonnieux, Lacoste and Ménerbes.

We employed Cyril rules which are if you want a peaceful drive do it while the French are having their lunch. This invariably has worked ever since we have been coming to France in the late 60’s. Nothing keeps the French from their food. WhenJanie first came to France she was mesmerized by the way that at 12.30 all that could heard is the rhythmic clinging of cutlery which was always preceded by the tantalizing smells of fresh food being prepared.

This left us with an easy and visually stunning drive through the Department roads through the towns before stopping in Ménerbes.

Stop 3 Ménerbes. With the Peter Mayle phenom despite the volume of people it has obviously been kind economically to the town. Everything has (for France) a well ordered and well layed out feel from the parking to the village. Simple salad Nicoise and salad Jambon and enjoy the late afternoon air in relative peace and quiet followed by obligatory ice cream. Good call Mr Mayle.

Stop 4 Gordes. On to the home stretch we twisted our way to Gordes – the iconic hill top town. The view from panoramique overlook is stunning. Sand colored stone stacked up the hill to create a honeycomb of life. Built in the times when villages were needed to be defensively planned makes for a stunning view.

Back to les Boriels for a swim and a great dinner – sadly punctuated by an English couple having a tiff. Even that couldn’t spoil a perfect day in the Luberon