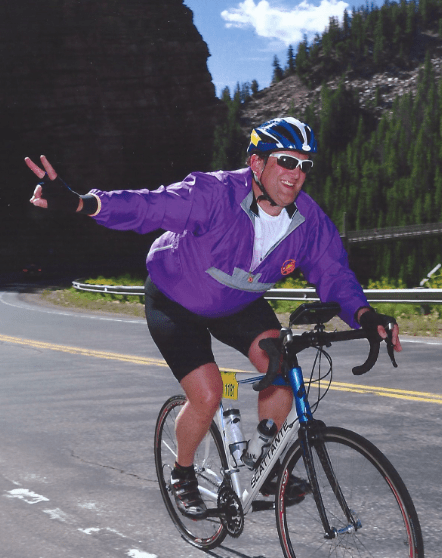 In early spring most years since 2006 I reluctantly wheel out my road bike, put on my warm clothes and reunite ass and bike seat for the 4 months of training needed to complete the courage classic. A three day (now only two day) ride through Summit county Colorado. The purpose of which is to raise money for Children’s Hospital and specific programs where funds can be directed if a team raises enough money.

Camaraderie – the definition of which is “mutual trust and friendship among people who spend a lot of time together“ or more accurately misery loves company! It was a kind invitation by my friend Tim for me and my wife to join his family and team Fat and Tired to raise money. I mean I have ridden bikes, done Triathlons, run marathons – how difficult can riding over a few mountain passes at 10,000 feet actually be? All the exercise stuff I had done quite a while ago I was now mid forties and less than in my prime. But I didn’t know this was the start of an association for next years.

We started training and had a blast doing flat land rides to Hygenie CO 34 miles round trip and promptly sleeping on getting home. This didn’t even have hills on it – let alone mountains. However it was what it was and we rolled up to the ride starting in Leadville (elevation 11412 feet- they pressurize airplanes at 10,000 and the high point of the Tour de France is about half that!).

The first Pass was Tennessee Pass which is actually pretty gentle before a very, very long descent to the foot of Battle mountain which cannot be described as gentle, even remotely – it is a short pitch with some challenging gradients and precipitous edges into the ravine – fortunately we were on the safer side of the road.

Off the top is another technical descent with potholes and gravel just to spice it up! This winds up in Minturn  an early lunch and then heading out to assault Vail pass. Hot day and ride through Vail had the novices wondering if we’d make it.  Whenever you get those moments you usually see someone from Team Courage, which comprises current and past patients – some on tandems written by helpers. Whatever whiney First World issue (like total lack of fitness) evaporates when you see these kids and young adults overcoming significant health challenges to just be there.

So onwards up the pass 3,000 feet with a few fun features including the yet to be named “oh shit” hill a 11% pitch that typically has people falling off their bikes because of the slope severity or lack of room to move because of the bike traffic. As we crested into Vail Summit there was a definite sense of achievement knowing there was an easy 5 mile descent into Copper Mountain.

Day 2 was steady and way easier ride with only fun on Swan Mountain and then ripping up to Breckenridge before the steady climb back to Copper Mountain. Day 3 was more challenging and taught me to look at contour maps in future. The description was climbing Fremont Pass before the long descent to Leadville and then a quick detour around Turquoise Lake I mean how difficult can it be going round a lake?

The first order of business was getting over Fremont pass. This is just a straight slog. No switchbacks just 2,590 feet of vertical and frequent storm run off drains. It’s a time to chat and relax and just climb – I’m feeling good acclimated to altitude and legs good from getting climbs in. Snack and obligatory photos then steep descent and tuck style cruise into Leadville before veering off to what I thought was the lake cruise. At the final feed stop there is definite intent – people are stocking up on more Gatorade and more snacks. There is also a little tension and nods by the old hands of what is about to come.

The more accurate description to going around Turquoise Lake should be to call it a climb – that is what it is. The first 90 minutes you are going up through a wood with no lake view. You do see the lake until you are looking down on it from 1,500 feet – gee great view! Then into a series of very technical descents on very rough roads. It is all we can do to hang on and keep it going. We do and we finish just as everyone is finishing lunch – as we come in totally knackered but with a great sense of achievement kids from the hospital put medals around our necks and all is well with world.

It is the start of a relationship with Children’s and the teams that has been a big part of our lives. Each year is different. Friends have ridden it with us and come back bitten by the same bug, do something hard and raise money for people who are doing something way harder. I cannot write that without crying a little because in helping we are touched by the humanity of others.

My highlights overs the years include:

The Luna bar sketch with Tim every year  –

Dancing at the finish which is now apparently immortalized out on YouTube.

Riding the with my bestie Bret – a trooper. Day 1 “Bret you probably want ditch the underwear under your bike shorts”  “You mean go commando” – bingo

“Bret we are going to go down this descent but you need to get in the lowest gear because you are going to turn sharp left then hit a steep pitch” –  we descend, we turn Bret at the top of his lungs Seeing the 11% pitch Oh Shit!

Bret and Craig crashing at high speed on the descent of Fremont but being ok though their bells got rung pretty bad.

Crying and saying a prayer for a grandfather riding his first Courage Classic as we rode up Fremont Pass. He had just lost his granddaughter.

Thinking about how different it was in the how Hospitals treat children and families today compared to when my brother was in the Hospital growing up. He did get a red fire engine though!

Knowing all the money we raise funds treatments support and research

Early morning on Lake Dillon on the second day

Always thinking that Children’s Hospital should do a golf tourney as we ride past Vail Golf Club 60 miles into the day instead of the bike ride.

Riding it with the kids and Janie

The guy who rides and he only has one arm

All the people who have and keep sponsoring us